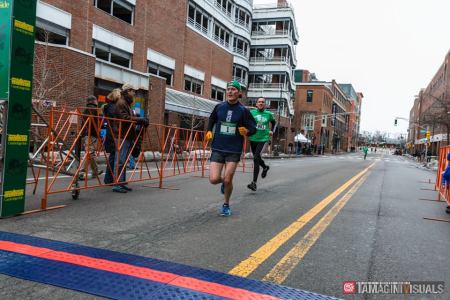 My goal coming into this race was to see where I was at speedwise in my quest at ridding myself of dead legs. Plagued with the well-earned dreaded dead legs for the last two years, it had gotten much worse last May after stockpiling marathons to get to number 100 and then doing a June 100 miler. My legs — and the speed in them — were dead, long gone. I not only could not spin the legs up fast like I used to, but even a 4 mile run felt like 8. Since running across the Grand Canyon this past October, I’ve been doing all of the right things in attempts to correct the problem. A month ago, finally, I started getting life back in my legs. I kept working on leg speed and was hopeful of at least getting under or near 19 minutes flat for the 5K. However, in the last two weeks leading up to the race, I had some key workouts that felt smooth, my pace was solid, and I was running on top of my feet, something I hadn’t done in a long time. When I’m running on top of my feet, my legs are spinning fast and I’m feeling smooth, I’m running fast or at least on the faster side. Because of this, in the week leading up to the race, I secretly hoped I could get down well into 18’s, perhaps even to 18:30. Even though I had a target number that would tell me where I was at, I would race this all out and not leave a second on the course. So although I had a time that would tell me a lot about where I was at, I didn’t have a target because I was going to run as hard as I could and see where the chips fell.

After pinning on my bib (race bib #1 — it’s a long story) and stripping down to shorts, I got out on the course to insert some strides. Although I did not feel smooth, I was getting on top of my feet. I eased into the strides due to a hammy that had been grabbing since the Tuesday prior. After roughly a mile and a half of strides, I squatted down on the side of the road and did 20 jump squats. I’ve found jump squats are great at aligning and stretching the muscles in the legs, especially for me with dead legs. A few more strides and it was time to get into the gates.

In a field of 1500 runners, I lined up three rows from the front. I figured worst case I was a top 25 finisher, so I had no problem bellying up there. In previous years without dead legs, I would have moved up a row or perhaps even two. But there looked to be some fast guys. I’d be lucky if I could get a top 15 or 10.

The starting gun cracked into the air and off I went. On top of my feet powering as fast as I could, I had a good enough jump and pull that there was no elbow bumping. I was focused on staying on top of my feet, assessing my hamstring, maximizing spring off my feet through my arches and onto the hammies, and being as smooth as possible. I knew that many of the 25 runners in front of me would come back. After 30 seconds, many came back. Another 30 seconds and I was in top 20. Another 30 seconds, now a quarter mile into the race, I was top 15.

Mile one came in a tick under 6:00. I had found a smooth pattern at top speed that kept me motoring but also kept the hamstring at bay. Uneven pavement would often throw me off. I would maintain a quick turnover even though I wasn’t getting much string in my stride until I found that pattern again. By then I had moved into top 15. The field was strung out and there was very little to no passing.

Mile 2 came in a tick under 6:00 pace. I was very happy that I was not falling off pace. And I was very happy that I was under 6:00 pace, something I honestly did not think would happen. Up the road I saw a collection of three guys and decided I would catch, pass, and finish ahead of all three. I bore down, focused on running as fast as I could, and varied leg speed and strength based on the terrain to maximize my stride, spring, and pace. I closed the gap to those guys, with one dropping back. I passed that guy and closed the gap farther. I could still see the lead vehicle, a police car, not too far up the road, and at that point I knew I was having a great race with the goods I had. I moved into 12th place, which is where I would wind up as I crossed the finish line in 18:30, which was good for 5:58 pace. At the time of crossing, I wasn’t sure of my placement in the old man category, but I could not remember seeing any grey hairs or bald guys up ahead, so I was hopeful of a Masters win. An hour later the RD, a friend of mine, found me to show me the results. I took the win.

This was a great race for me. I honestly ran hard, smart, and efficient. I didn’t feel as smooth as I would have liked, but I think that was more the hamstring than my dead legs. Half way through the race as I was sucking wind and listening to my lungs wheeze with some soon-to-be-sickness from one of the kids, I could not help but give smile because, truth be known, I really missed racing, being a part of a race like this, and running fast and well. It’s an amazing feeling that keeps me coming back. And it keeps me doing what I need in order to get the zip back in my legs. 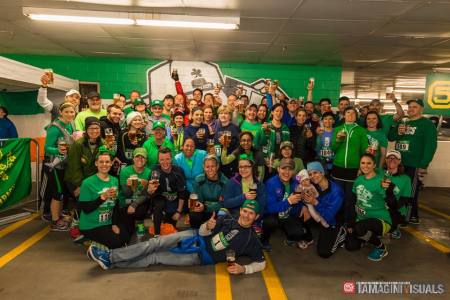